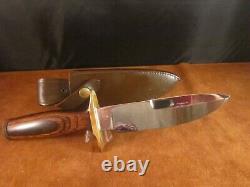 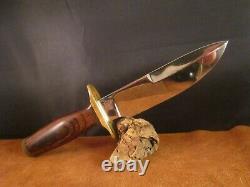 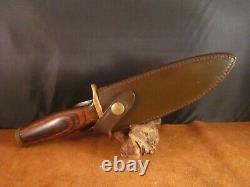 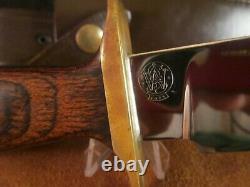 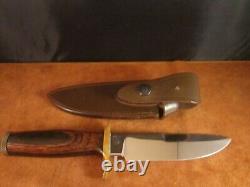 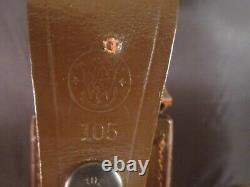 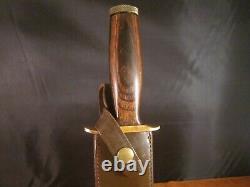 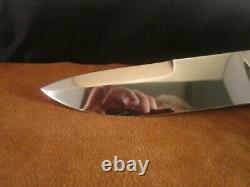 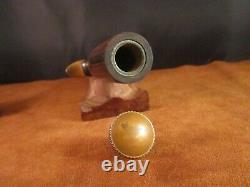 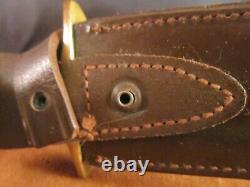 The Survival knives 6020 and 6030 had a hollow handle cavity covered by a solid brass screw-on cap. The handle was round and blended into a double quillon cross guard for maximum workability and production. The 5 blade had a wide flat spine and a sharpened false edge.

Overall length is 10" with a 5.5" blade and weighed 10 oz. This knife would have a unique story to tell. It had a screw hole through the belt loop like it had been screwed to the side of a cabinet, inside a door or somewhere else and mounted upright so it could be easily accessed but probably never was and could have been forgotten. The brass guard shows a definite patina on the where the strap secured the knife to the sheath.

The snap closure on the belt loop has been pulled off which happened frequently when the brass tarnishes. This model 6030 Survival Knife was manufactured in 1975 the 1st year they were produced and is serial #10135. A great knife and conversation piece. The item "1975 Smith & Wesson Survival Knife 6030" is in sale since Saturday, March 13, 2021. This item is in the category "Collectibles\Knives, Swords & Blades\Collectible Fixed Blade Knives\Modern Fixed Blade\Factory Manufactured".

The seller is "onehikes" and is located in Port Orchard, Washington. This item can be shipped to United States, all countries in Europe, Canada, Australia.